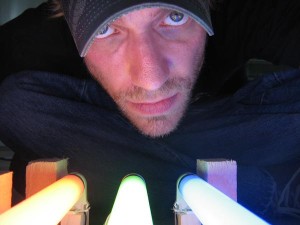 The technoid insanity was born in Frankfurt in 1976. Affected by the Frankfurt clubbing scene in the 90ties, Torty came to Music Production by
accident. In 1999 his home turntables were changed by the first samplers and so the music career began…
Torty founded the „Clubhopper Frankfurt“ in 1999 and arranged several tours to clubs and parties, mostly connected to his live acts. By stopping djing in 2003, it became quiet around Torty and he lived a longer time away from the party life, applying himself not only to music but also to designing three-dimensional pictures and sculptures which were published and released under the name „Matten Art Dimension“.
In 2006 Torty was back from darkness organizing the „Elektro Stammtisch“ till 2008 and touring through Frankfurt and different locations. The beginning was the cult dance club „Funkadelic“ in Frankfurt, being transformed to a space ship by him and his crew. Idea, Concept and the decoration came from his mind.
Driven by the desire of bringing the spirit of the 90ies back to life again, Torty was working together with different international DJ’s to get this done on his events. Musically, Torty has grown again since the turn of the millennium, surprising the crowd again and again with spheric machine sounds and a touch of „Back to the Roots“.
Since 2007 Torty is occupying himself even more intensively on productions and working as an remix artist for different musicians from various styles. His
tracks were released as CD’s as well as digital e.g. on B12 Records Germany, TimeZone and Zentimental, just to name a few.
In December 2008 Torty started his artist platform „XenoMorph Promotion & Events“ and is planning and organizing events, so the electronic music scene was enriched by another party crew. Beside his 50 XenoMorph events and the participation as official floor partner of the I-Motion on Ruhr in Love 2009 and 2010, Torty is writing scene reports for different magazines like Livestorymarkt.
2010 Torty and his XenoMorph Crew, fusioned with Monti-Music and going a joint musical Way. Together they run on a platform of Information (BLOG)
on www.montisworld.de and present news from the electronic Music Scene and interesting Interviews.
Torty presented since 2011 on various Radio Shows different radios and through his hard work came to a successful Record label „Planet Bass Records“ and publishes various works from his pen.
Due to the growing interest in the person Torsten Matten, he led on 24/03/2012 the Spring Festival of the German Air Force, through the NATO base Decimomannu in Italy, on behalf of Multiline Promotion & Event Service. Torsten Matten proved with this event for the Air Force to be able to organize successful and led locally by the event highlight outstanding. Quality improvement in the event area is secured by these successful Artist and Event Manager from Frankfurt.
In August 2012, starts a new commercial enterprise under Torty’s line. „Torsten Matten Entertainment“ looked after Artists in organizational form in all Areas, such as. Postings from third Parties and/or Public Relations for Online, TV and Print Media as well, as the exclusive Presentation of Products and/or companies on new or existing Market.
To shine through the jobs created are in the past, „start-up“ companies and etablished agencies again in a new light and make it known in the scene, this is the new platform for Artists, Newcomers and businesses in the Major Media.

One Reply to “[acts] Torsten Matten aka Torty”